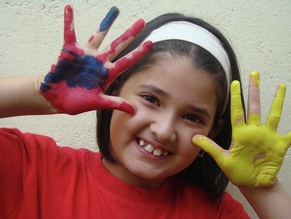 Diksha was started in the year 2000.   The Vajramani Kailasam Educational Society was formed in the year 2002.This initiative was taken up by Sandhya, a pharmacist and Sunitha, an interior designer. These women wanted to give children what their own children have missed at school and hence.

Diksha  started with  23 children housed in Kindergarten in a small place. After a year with 38 children then moved into a bigger premises and was there for eight years and steadily grew to a strength of 120 children housed in classes kindergarten to grade eight. In March  this year i.e 2010 Diksha very happily moved into a much bigger premises into the lap of the nature just 13 Kilometres away from where we were. Diksha now has a grade nine and next year these children will be appearing for the national board examination. With a teaching staff of 15 Diksha is growing steadily and strongly in all fields.

The same happened here. The system kept delivering it’s promise to those handful of people and took its toll on many others who could not handle its stress. The quest for education to lead an enriching and purposeful life became a race for acquiring materialistic goals with no regard for the long lasting detrimental impacts of that race on our lives. Such was the power in the success stories that a talk of any other form of education that did not make a child a race horse, was considered blasphemy. Set against such a backdrop, Diksha- A Waldorf School was started by a couple of teachers who took it as their responsibility towards our society to rid it off it’s blindfold and show it the way for ensuring that our children receive an education of the highest standard, benign touch and lifelong existence. The journey has not been a cake walk and for quite some time. Things today however have taken an upward turn and the rise now is much expedited and the march towards its goal further strengthened and more determined.
Instead, a school and the education it provides is to ensure that whatever we do is for our children and their well being in every sense of the word. It is to ensure that our children realize their purpose and achieve their goals, for only then can any human being lead a truly happy and contended life. It is this happiness and contentment in lives that Diksha has pledged to pursue.
www.dikshaschool.in